Local residents, their dogs and visitors from far and wide are fortunate in being allowed to walk freely around the Groot Constantia wine estate to enjoy not only the estate’s beauty but also the lovely natural surrounding attractions.

When there our dogs set the pace, checking all the message spots, helping the squirrels along a path of greater exertion and then deciding which way is the most interesting for them.  Only after this is done and they have had a good walk are their minders allowed to view other items of interest.

The manmade structures are definitely worth considering.   When standing in front of the old farm house look upwards to inspect the symbolic female figure of abundance. It is difficult, when reading various sources, to pin down just when this figure was placed in the recess although it is thought that Anton Anreith was the sculptor. Anreith had been born near Freiburg, Germany in 1754, arrived in Cape Town in November 1777 as an employee of the Dutch East India company. 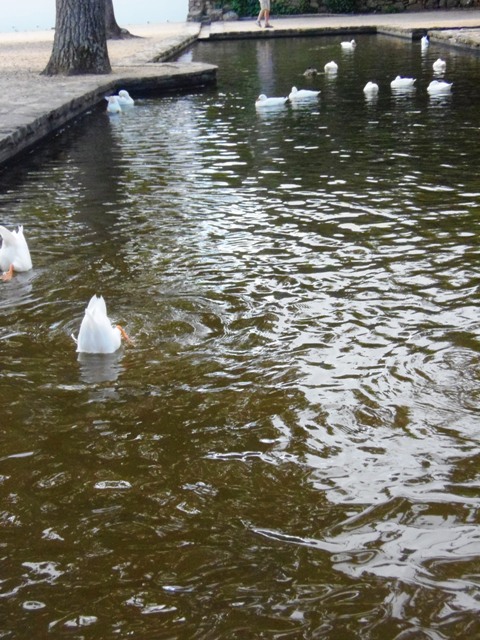 Next walk towards the back of the building and between it and the old wine cellar is a long narrow pool where the ducks swim.  The ducks, in turn, keep a close eye on the watching humans just in case there are any free handouts about to come their way.  But does the thought cross your mind, where do the ducks go at night?  If, one is on the estate in the late afternoon, one might see them waddling towards the back of the house and then turn left at the yard gates. The ducks, show time over for the day, will begin feeding in the fowl enclosure.  A practical past and present way of keeping them safe.

Behind the homestead is a set of steep steps, somewhat damaged and a bit of a puzzle. They lead to a deep cleft shaded by trees and shrubs into which a trickle of water enters. It is not known for what purpose the steps were built. Two suggestions have been put forward. One:  that at some stage in the very early history of the Constantia farm, slaves used it as a bathing area. Two :  that a small dam was created  there from water flowing down from a stream near to the Historical Bath  and which helped to water a kitchen garden in the area.  Unfortunately research had not offered proof for either of these two theories.

Now that one is walking around in this area look upwards once more this time towards the old wine cellar and note the decorations of laurel wreaths, flowers and bunches of grapes and references to mythology. This too is thought of as Anton Anreith’s work. A sculpture of Ganymede, the Trojan boy, sitting on the back of an eagle attracts attention. The eagle symbolises Jupiter, chief god, in disguise when he captured Ganymede and made him his cupbearer.  Jupiter was the Roman name for this god while the Greeks referred to him as Zeus. Next to Ganymede are plump, mischievous looking putti.

A sundial, possibly dating from around 1925 when the old house was rebuilt after a fire caused considerable damage, is an attractive feature placed on higher ground near the modern wine cellar.