Observing birds offers pleasure to many human beings.  Many different species of garden birds have, at times, taken their ease in our garden.  Nests have been seen in a variety of places sometimes with chicks making their hunger known.

Over a period of years a large, well branched poplar tree was the place chosen by the Cape Weavers to build their designer nests.  It was a delight to watch their comings and goings. 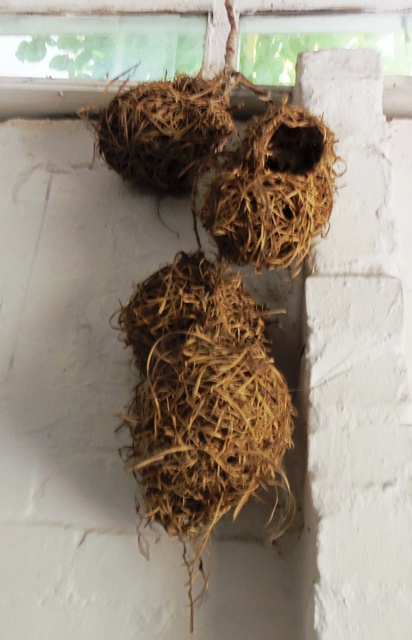 Weaver nests hanging in our back stoep

Then suddenly two Hadeda Ibis arrived and began bringing sticks to a branch. It looked as if they were going to build a nest.

The weavers carried on with their own affairs but after a while the noisy, screaming Hadeda Ibis seemed to be too much as neighbours, the weavers left and have never returned.  The Ibis left but a few years later two more arrived in late winter and began, in earnest, to build a nest in a tall Syringa tree. From evidence we surmised there had been three eggs in the nest but later saw only one young bird with the parents.

Time passed and in late spring of the same year two more Ibis arrived.  We do not know if it was the same pair.  Anyway they laid eggs in the same nest after having added bits to it. Of this clutch one fully fledged chick was found dead below the nesting tree.  We speculated that a pied crow was the culprit.  Whenever chicks are hatched in the garden, one sees the crows circling above.  If other eggs hatched, we saw no further proof of young birds.  These two adult Hadeda Ibis are still around and somewhat arrogantly thumb their long beaks at us when trying to drive a car down the driveway.  They simply ignore the vehicle.  Hooting does not help. Despite their noise, they are not unattractive birds. Also, for gardeners, they do have their good points by eating unwanted insects and snails.