When one is familiar with an area where one lives, works, studies etc., it is quite easy to overlook small, but interesting, details Today  many people communicate by the email system or text messages on mobile phones so much so that writing a letter and placing it in a post box, then waiting for a reply to fall into one’s letter box is almost a foreign idea!  But there are those who still use what is locally called “snail mail” and there are still examples of early post boxes.

An even earlier means of keeping in touch with the outside world was of a shoe tied in a milkwood tree at Mossel Bay, along the Cape coast.  In 1501 Captain Petro D’Ataide, an officer in the Portuguese explorer Pedro Cabral’s fleet of ships on their way home, left a letter telling of the disaster they had faced on their way to India.  It was hoped that the communication would be found by one of the outward bound ships of Joao da Nova.  The tree by the way was declared a national monument in 1938.  Other early travellers passing the South African coast  found another method of posting their mail.  They left letters beneath large stones on the beach near the source of fresh water.

Travelling forward  a couple of centuries one will find a Victorian letter box, identified by the “VR” still to be seen, attached to the boundary wall of  a private home on the Main Road, St James. This seaside suburb had a telegraph office in 1897 but no post office. The latter only became a fact on 12 July 1937.  Still residents had a post box for their letters. 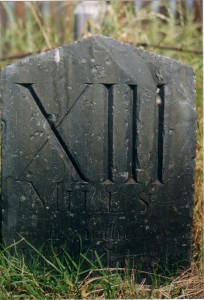 Another early means of communication was by way of milestones, used to inform the drivers of wagons drawn by oxen, or men on horse back how far they were from the Town House in Cape Town or how far they still had to travel to reach their destination  either on the road to Simon’s Town or to Stellenbosch. The placing began in the early  1800’s and  were certainly an early form of road signage.