In the early days of the Cape Peninsula’s history, the local authorities kept a constant eye on ships passing

or entering Table Bay, Simon’s Bay or Hout Bay.  Maybe a ship required shelter in a safe anchorage or fresh water and supplies.  But, at the same time, the authorities needed to know who was a friend and who an enemy!  This defensive attitude was not without foundation as during the period of the Dutch East India Company’s rule (1652-1795), the English greatly desired the Cape at the foot of Africa as they too, like the Dutch, did business in the Indian Ocean and the East.

The result of this nervousness was the building of fortifications and the placing of cannons in strategic positions as a form of defence.  Today one can see, in various places, examples of these old ”warriors” their roar now long silenced and in some cases a long way from their original position.  In the parking area of the Constantia Nek restaurant one will see an example.  This may seem an unlikely placing but the Conway redoubt (a fortified outpost) was situated in the area and was used as a lookout and signalling station. It was named after the Irish commander, Count de Conway. 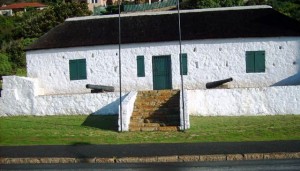 On the Main Road, Muizenberg, placed at the edge of a small park, are two  cannons.  This was in the vicinity where the Dutch barracks was to be found just a short distance from the Posthuys which had once been the headquarters of a Dutch garrison. The origin of these cannons are one Swedish c1782, the other English dating to c1830.

In 1998 two Dutch cannons were returned to a position above Kloof Nek, overlooking Camps Bay  The history of these two goes back to the late 18th century and were recovered from a gorge in Kloof Nek covered with the debris of time.  They were also part of the signalling system against possible invasion, particularly by the British.

A further two cannons also Dutch in origin, were unearthed in 1962 – these were from the Camps Bay Battery erected c 1782. Today they are to be found on the corner of Kloof and Main Roads, Camps Bay. Others are to be seen at the Castle of Good Hope, the Cape Town Docks, Simon’s Town Naval Dockyard and Hout Bay.

These old weapons of war reflect aspects of history but at the same time they seem to fascinate people. Often one sees them placed in various places almost as a form of adornment.  The Clovelly Country Club has two examples near the front of the Club House. Others are displayed  in the grounds of museums, at a post office,  a five star Hotel,  a restaurant etc.  Why one wonders?  Do they suggest power, past political glories or simply stand there as reminders of the sometimes foolishness of mankind?